So maybe I'm a nosy person. There! I said it.

I like to tell myself that I have to be in order to be good at my craft.

I'm going to keep on spying and warning the stars as far as I'm concerned. That's how it goes.

I started collecting "lost" lists at work sometime last year. Yes, I work in a pharmacy--but the pharmacy is located within a grocery store.

95% of the time these lists are relatively mundane and contain nothing too funny except for the occasional misspelling:

You catch my drift. Simple. To the point.

And definitely nothing to be judgemental over--you should see my handwritten notes sometimes. But it is interesting to see other people's handwriting and wonder what the local serial murderer is having for dinner.

Then there are strange combinations like: Children's Tylenol, lotion, KY Jelly

hmmmmmmm...I want to go to that house. 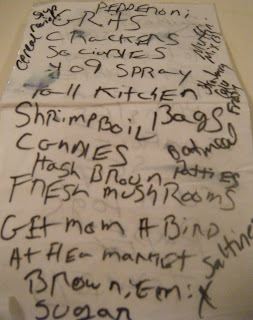 Then I got THIS list last week...it starts off normal enough:

"Get Mom a Bird at Flea Market" So I laughed and laughed. I read it to co-workers. Line by line just as written...they were pretty bored and didn't understand my reckless laughter until I got to the "good" part.

Random! So random. It was the week before Mother's Day and I guess Mama need a new bird, but how did "fresh mushrooms" remind the Note Writer of the bird? And how can you just continue on to Brownie mix and Sugar after that?

This makes my previous "winner" list seem stupid. It was "CHERRY PIE filling" written on the front of a torn off box of generic sudafed. That was it.