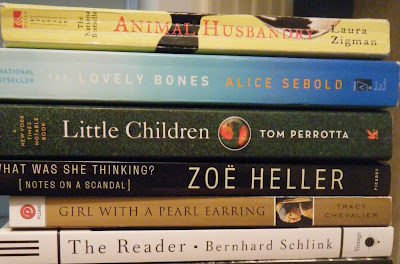 Another trip to the bookstore (they usually run about $1 a piece) made me realize the amount of books I own which have also been made into films.
"Modern" books, let me rephrase this--because how many film versions are there of anything Shakespeare or Austen? Exactly. You could also include Little Women, Gone With the Wind, The Great Gatsby, Of Mine and Men, To Kill a Mockingbird in the realm of "classics" I own which have also been made into film.
And In Cold Blood was turned into Capote (recently read)...and then I have a few short stories which... OKAY...we're only talking about the twelve SIX pictured above!
Now here's a secret: I think I say 100% of the time that I read the BOOK first before seeing the FILM version. NOT TRUE! I only read TWO of the above books before the film came out.
Animal Husbandry (Laura Zigman) was turned into Someone Like You in 2001. I had read the book and had no idea about a movie until I saw a preview and screamed, "HEY! They stole that from the book I read a while ago!" Yeah, I was that passionate about it.
The Lovely Bones (Alice Sebold) was read several years before the (very) recent film. I even loaned it to someone so she could read it before the movie came out. I liked the book better, although I appreciated the film as well.
---------------------------------------
I learned via a somewhat terse conversation in a Film class that movies and books are to be seen as separate from one another. This is a hard concept. Readers don't want to see their imagined worlds "ruined" on the big screen. We're a very specific bunch. I've learned to handle/watch the film version with a grain of salt (so to speak).
---------------------------------------

(Films before Book for the remaining run down)

Little Children (Tom Perrotta) is one of my favorite films as well as one of my favorite "modern" books. It is a guilty little pleasure for me (personal reasons) and even though the laundry room/basement scene in the movie is beyond amazing (hot hot hot), the chapter entitled "Reasons it Might Be True" is just as gripping.
What Was She Thinking? (Zoë Heller) was turned into Notes On a Scandal (2006). I was highly "into" the film, but have yet to read the book. It is one of the $1 finds of the day. The ephebophilic relationship is a commonly written about subject. I learned a new word today--click on the link and you will as well. (Edit: I'm 50 pages into it now)
Girl With A Pearl Earring (Tracy Chevalier) is a historical novel written/based on a painting by Vermeer. I have seen the film and I have studied Vermeer (officially, for a class) and so I felt it was time to grab the book. Again, it was hiding in a $1 box; glad I went shuffling through it.
The Reader (Bernhard Schlink) was one of those thought provoking films. It really had me. I bought the book in hopes of digesting it. It still hasn't happened. It was translated from German. As someone who has a deep understanding of the language, I can't stand reading the translation. I need the original (in German) I think. This is the same reason I can't read Kafka.
(six more to come tomorrow)
~~J
Posted by janet at 8:48 PM