Poem in your Pocket (day):

A woman who writes feels too much,
...
She thinks she can warn the stars.
A writer is essentially a spy.
Dear love, I am that girl.
(Anne Sexton)
~~J

Pronunciation: \ˈvu̇n-dər-ˌkint\
Definition: one who succeeds in a competitive or highly difficult field or profession at an early age
***
Prima! Wunderbar!
I'm stop throwing around my "fancy" German and get on with the show!
The University of Memphis has a very special announcement, and it's a boy!
Not only is he a multi-tasker (as evidence from Val Canez/Tucson Citizen shows), but unlike the one who shall remain nameless (think: Lord Voldemort) he actually turned down Kentucky last year.
Students and professors on campus this morning seemed excited. Maybe it was in part because now we can finally stop the speculation madness. But I heard a lot of great comments:
Finally! They didn't have to go far to find him.
One of the Youngest? Good! He'll have fresh new ideas!
Then there were the comments by complete strangers I heard OFF CAMPUS:
Really, he did all the recruiting, ya know?
The players can related to him better, he's young!
Open arms! And it's not lost on me that one year ago tonight...well, you remember what happened. You were watching, mouth agape with tear-stained faces too!
1996: Arrives at Arizona as a walk-on guard from Kingwood, Texas
1997: Part of UA's NCAA championship team
1998: Receives bachelor's in family studies after only 2.5 years
1999: finished master's in teacher education
2000-01: Lute Olson names him UA graduate assistant coach
April 2002: Is named UA assistant
2005: Rivals.com calls him one of nation's top 25 recruiters
2007: Turns down Kentucky assistant's job*
2008: Accepts Memphis assistant's job
Today: It becomes official at Noon!
Yes, he is 31 years old. Yes, I refer to him as "the HOT ONE, right there on the bench..." (a bit schoolgirl, I know). YES, we have a new head coach...new era of Tiger basketball starting.....very soon!
~~J
Posted by janet at 10:41 AM No comments: 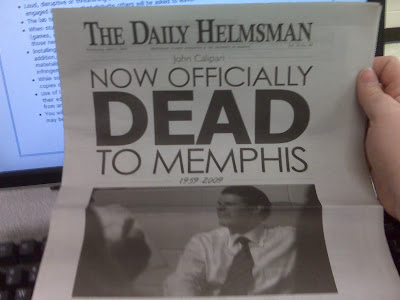 It is the Independent Student Newspaper of The University of Memphis--

(the only newspaper on campus)

And I was more than pleased when I saw the front page.

The first words to leave my mouth? EXACTLY!

And being the consummate "pack rat," I took at least five copies home with me.

What can I say? It's a wonderful front page. Very "modular" as they say in the journalism world. Not too much gray space. There is an obvious focus. I like the use of fonts. It's simple and straightforward.

I hope this ends the madness and we won’t have to deal with it again for a very long time. Because frankly, my outside voice is weary of screaming in silence.

At least the PAUSE button has been depressed and we can go back to our regularly scheduled lives. I don’t really recall what I was doing on Sunday night or early Monday morning though.

I’m pretty sure it had something to do with class(es).

I have another fiction/short story due in less than two weeks. There is also a very large research paper (will I ever get over my fear of William Faulkner?) due two days after the short story.

And I think I'm working 30 hours a week, on top of my five classes. It's funny how easily our thoughts shift in moments of (perceived) high drama.

Speculating over a new head coach for our beloved Tigers basketball program seems to be next on the menu of public opinion.

Mike Anderson (Missouri) has signed a new deal to remain firmly planted. I think Memphis is classy enough to resist riding in and stealing a coach.

(Did my outside voice just win?)

There is a lot to consider now. Sheer determination and grit would fit nicely. SKILL should be on the top of the Want list. No hasty decision needed. But don't push PAUSE again, please.*

*Although now I am versed in the fine art of simultaneous BlackBerry and Note-Taking.

Thankfully this episode has erased what happened Thursday night. Can anyone even remember that far back? Friday I was walking emotional wreckage.

I even had to turn off NCAA action. Do you know how serious that is?

In the grand scheme of things, not really. But if you are reading this in the first place--you know where I'm coming from.