(a statement proven by this very picture -- snapped this morning) 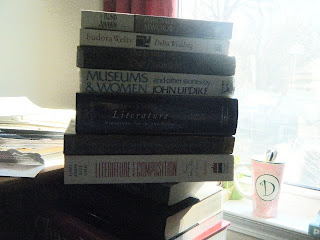 If I sleep with enough literature books under my bed, will the knowledge seep into my brain as I toss and turn OR do I have to open up the pages and actually read?

I jest (you know). But it was a good way to preface another trip to the used bookstore (maybe).

This time around I specifically did NOT pick up any F. Scott Fitzgerald (although a couple of his short stories are in the anthologies). I tried to be a little gender-biased and pay homage to my fellow female writers:

Margaret Atwood -- The Blind Assassin* (She is currently being read by a friend as a major project, so when I saw her name, I figured I could dive in as well)

Eudora Welty -- Delta Wedding* (Which I may have a copy of in storage--or I was supposed to have a copy of for Southern Literature, or I've heard it mentioned a few times and decided it was time...)

Sylvia Plath -- The Colossus* (Her first collection of poems, which were not hailed by critics...so why not have more Plath to carry around?)

And then I saw a 1st Edition John Updike collection (Museums & Women) and I had to buy that one as well. He is a master of the short story and who doesn't want to own a 1st Edition Updike?

So I broke code. Ah well.

Brief Yoga Update: We did enough leg work last night -- I have been making not-so-attractive noises as I go up and down the stairs.

Brief MFA Update: There was no e-mail at 3am, 5am, 7am, or the three times I've checked while tying this entry.

& I plan to see Alice in Wonderland before the clock strikes midnight.

p.s. The Mail Truck put me out of my misery with a rejection letter. That's all the news I need for today -- Thanks, universe.
Posted by janet at 9:40 AM

The Blind Assassin is SOOO good!

I also keep obsessively waiting for an e-mail from the Los Angeles Review. I sent off the revisions (they were pretty minor) and keep waiting for the e-mail that says, "This is great! We'll publish it!" so I can brag mercilessly (It's the "Little Ram" poem posted on my blog and when my class workshopped it, they tore it to fucking pieces. So I just wanna say, "I don't care if you didn't like it. IT'S GETTING PUBLISHED, MOTHERFUCKERS!" You know, maybe I'm a little arrogant...).

Who cares how much you get rejected? GMU is awesome!

I looked over your poem when you posted it--and found I couldn't really read it--because I was pretty sure I was going to be in tears by the time it was over...

I guess I need to buck up and just do it, huh?

p.s. I know GMU is fantastic, I'm trying to keep my emotions under wrap until I hear the F word (funding).

Then I get to tell a certain other program director that I won't be reapplying because...I'm going somewhere else!