My Senior year of high school (let's erase the year) I remember being in my "Journalism" class (as co-editor of the newspaper) and one of my classmates came in with the answer to a very big and important question.
Kyle (a self-proclaimed U2 and Elvis fanatic) came in and wrote the following on the blackboard:
ELVIS = LIVES!!!
Oh yes, that rather famous anagram had never been pointed out to me before, so I was taken aback. I was impressed. I was sure THIS was the coolest discovery in wordplay ever (obviously, I was a bit naïve).

But, get this--it's still TRUE!

With over 15,000 Elvis-licensed products out there (according to a spokesperson at Graceland) it’s no surprise that Elvis Presley is always on Forbes Top-Earning Dead Celebs’ list. (He came in at number two in 2010)

Hey! The King is alive in our hearts, right? (alternative word for heart: wallet)

So this holiday season, just like every other holiday season in recent past, I was surprised with more fantastic, wacky Elvis-related collectibles. Obviously I AM one of the Elvis "people." At least I'm easy to shop for, right? 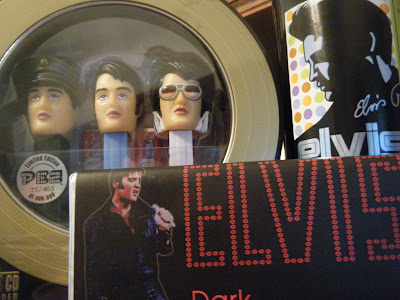 Here are a few of my relatively "recent" fun ELVIS collectibles….
like the Classic PEZ candy dispensers in 3 different Elvis Presley designs (as you can see) and there is a 3-track CD featuring a song from each era: '56--Hound Dog, '61--Follow That Dream, '70--The Wonder of You.

Dark chocolate (adorned with '68 Comeback Special black leather *purrr* Elvis), made locally by Dinsthul's (get you some!)
And lastly (for this post at least) that's a bottle of limited edition Elvis wine. We have a couple numbered bottles of Cabernet Sauvignon, which shan't be opened anytime soon, but we have actually consumed the Chardonnay--not bad, not bad at all!
~~J
Posted by janet at 3:46 PM