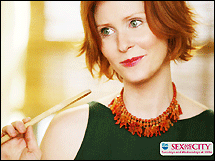 "Your good friend has just taken a piece of cake out of the garbage and eaten it. You will probably need this information when you check me into the Betty Crocker Clinic."

Carrie's voice of reason and generally the girl who tries to act tougher than she really is, I have always had a soft spot for Miranda Hobbes.

Maybe it is her "single comedy routines" or her fear of dying alone in her apartment and being eaten by her cat, but Miranda seems to live out the most relatable fears and situations for me.

Before going on a date with a detective who was too "hot" for her, she had one too many cocktails to loosen up and HE ends up NOT giving her his card, but a card for AA instead. She even pretended to be "less" than herself (a stewardess versus a lawyer) to date a guy who was actually pretending to be a doctor instead of a sporting goods store manager.

There is the Miranda I will never be: cat-person, successful lawyer via Harvard with a rigid Type A personality who looks great in bold, bright prints and short hair.

There is the Miranda I am: cynical, sarcastic and most likely to hide or walk the other direction when faced with an ex on the street. Also we both love our sports teams and wearing sweats!

There is the Miranda I want to be: able to handle everything life throws her way with a little bit of humor and grace!

Heartwarming: After being completely cynical after Carrie's first big break-up with Big, Miranda meets her at the coffee shop late at night to talk about it anyway AND at their son's first birthday part, Miranda realizes that Steve is THE one and they rekindle their relationship.

Heart wrenching: The fight between Miranda and Carrie in the middle of Season 6 about Carrie moving to Paris STILL makes me tear up as does the episode in which Miranda's mother passes away and she has to walk behind her casket alone, until Carrie joins her.

Hilarious: Miranda spends night after night playing “peek a boo” with a stranger in the building across from her only to find out he is actually cruising the man who lives below her AND Miranda becomes an unexpected participant during a Sex class held in a couple's apartment--she gets a face full of love!

Honorable Mentions: Miranda explains to her new housekeeper what tools a single woman needs (goodie drawer) and doesn't need (rolling pin) AND Miranda becomes addicted to chocolate while on a "sex break" and ends up eating a piece of cake out of the garbage can.

“Maybe it's time I stopped being so angry.”

but who am I? Please let me know